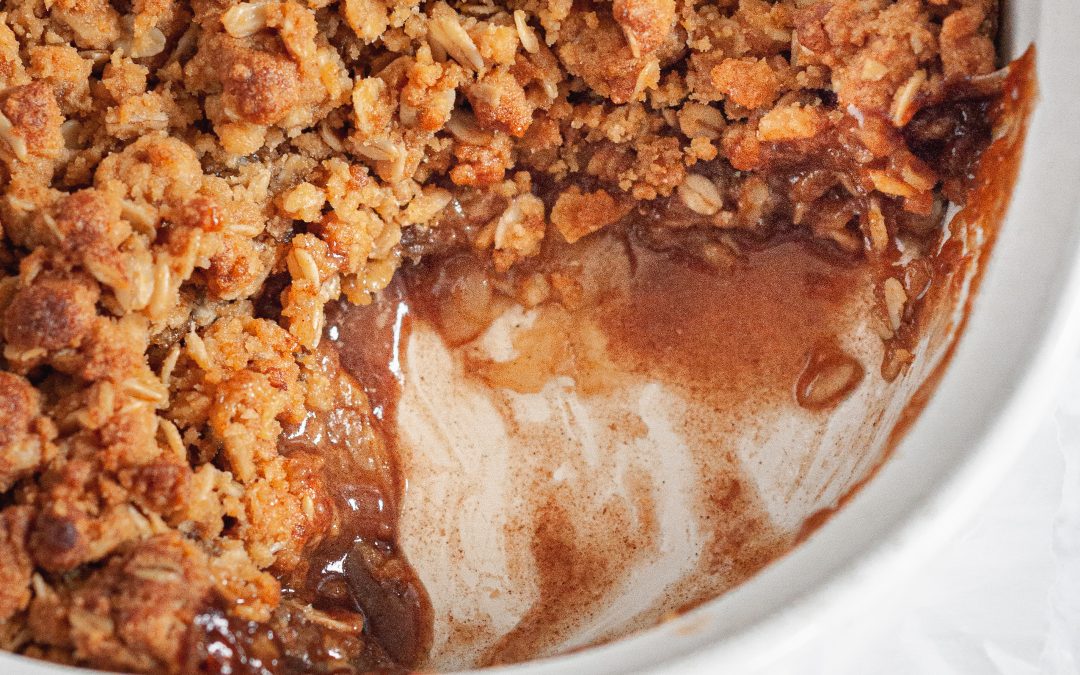 A, B, C. 1, 2, 3. Easy as gluten-free. Gluten-free apple crisp that is! Truth be told, it’s actually secretly vegan too but you wouldn’t even know it because apple crisp is 1000% delicious. There’s something truly comforting about a freshly baked apple crisp. And seeing as the weather is cooling rapidly, I relished every warm bite of this tasty fall treat. 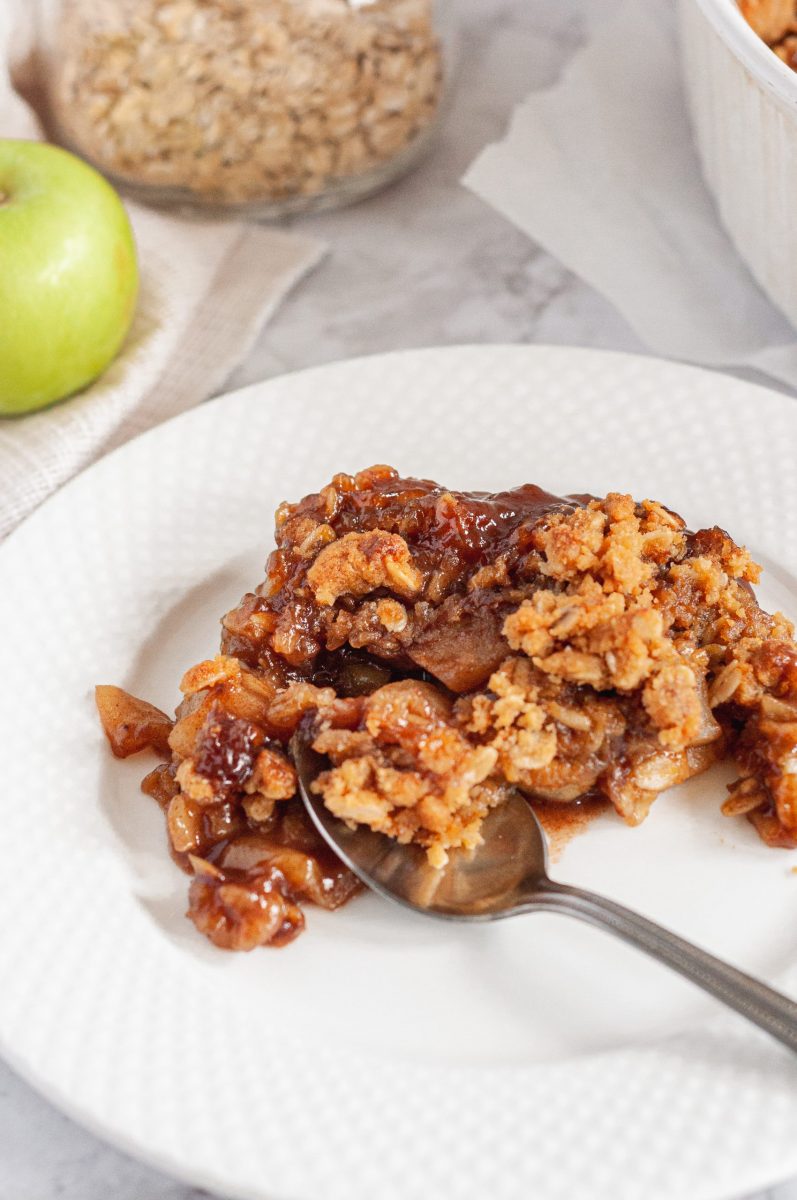 Warm scents of cinnamon and apple wafting through the open oven door. The bubbling of caramelized brown sugar around the toasted edges of the golden-brown oat crisp top. Soft juicy apples that burst with autumn delight in every single bite. This is everything apple crisp and more. The best part, it’s easily gluten-free and even vegan!

What Is Apple Crisp

According to Canadian Living, apple crisp is a baked fruit dessert topped with a layer of crisp and crunchy ingredients. That sounds about right to me! It’s quick, easy, and totally delicious. The bottom consists of peeled, sliced, and spiced apples. On top, is a layer of crispy/crunchy oats, brown sugar, and flour baked to utter scrumptious perfection. 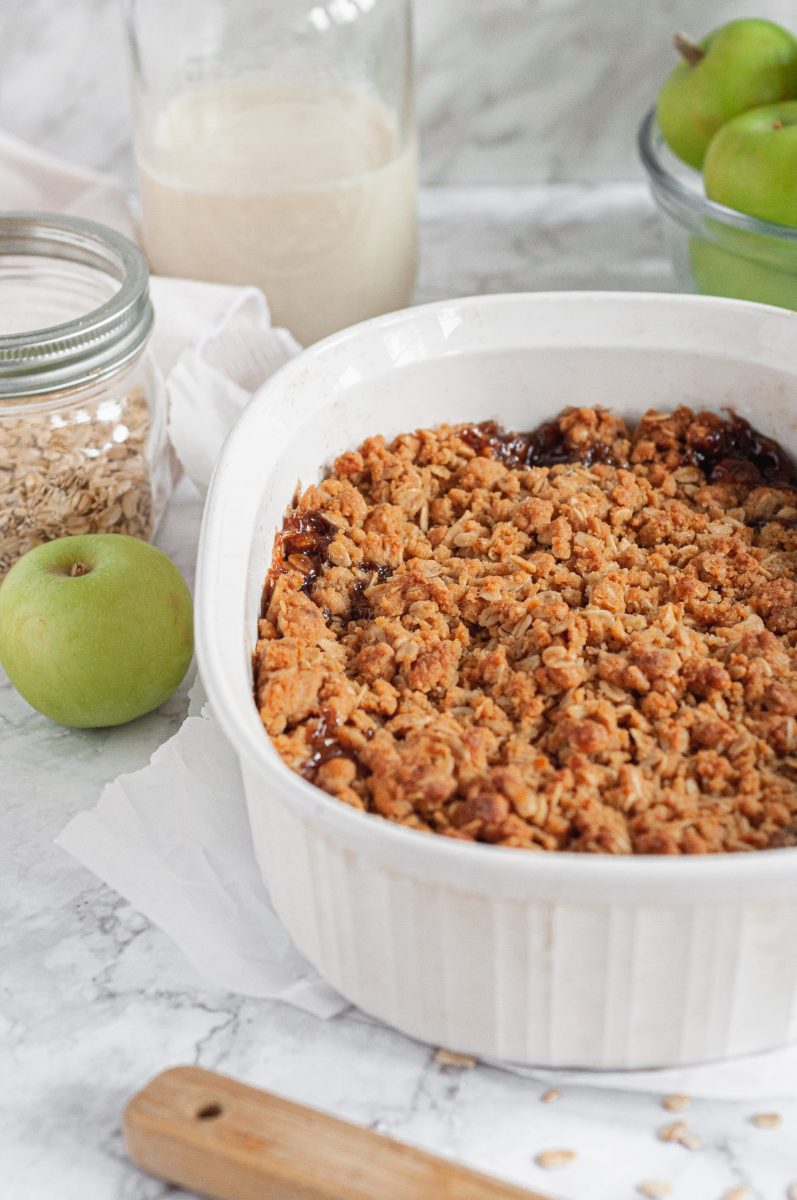 What Apples Are Best For Apple Crisp

Here’s where things get a bit particular. Each person has their own preference. So, I’ll start by saying my way is not the highway. Just my own personal opinion, k. I prefer using all tart apples, such as a Granny Smith or Honeycrisp. These varieties are often quite firm which hold up well to baking. I’m all for experimenting though so give it a whirl with what you got.

How To Make Apple Crisp Gluten-Free

To make an apple crisp gluten-free is far easier than you might think. First, swap out the regular flour for a 1:1 gluten-free baking blend. You’ll want to make sure it contains xanthan gum which provides the elasticity that gluten would normally do. 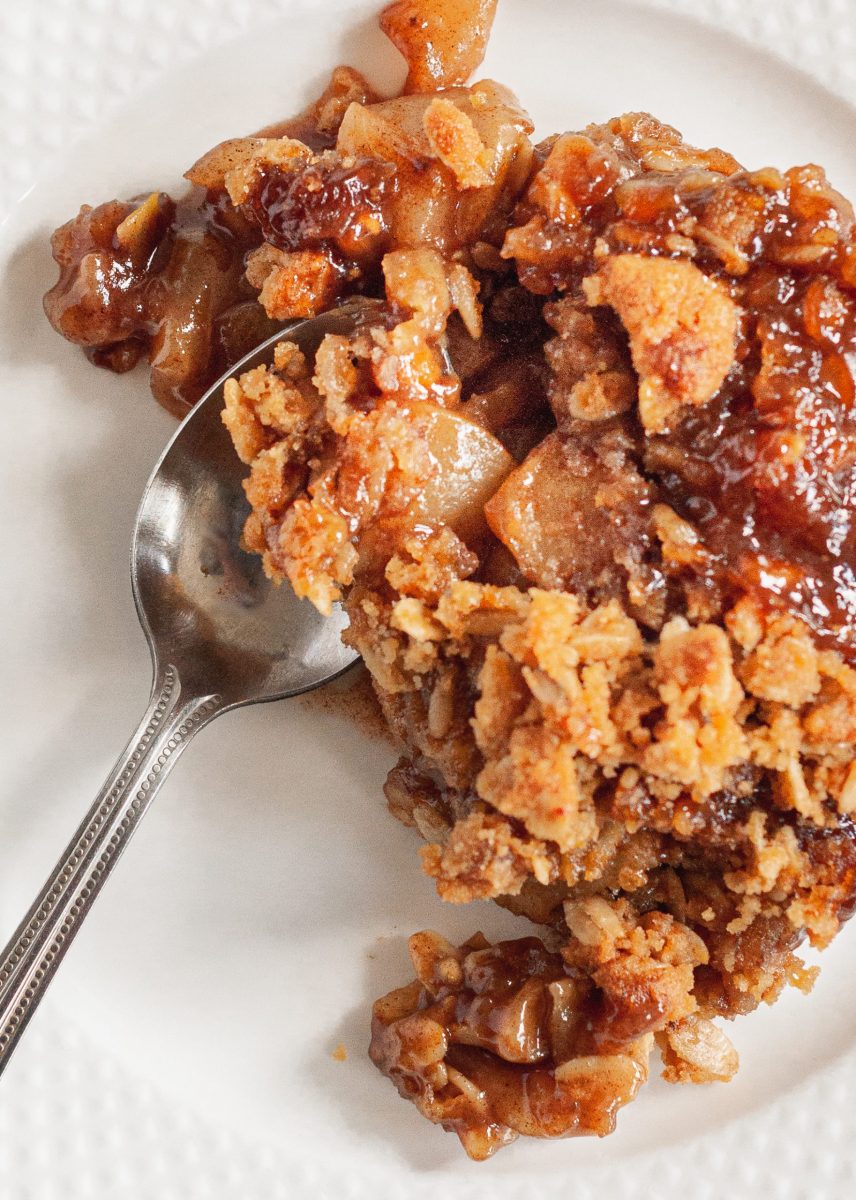 How To Make Apple Crisp Vegan

This, as easy as making a gluten-free apple crisp, is just as simple. Butter, which is traditionally used in apple crisp, is swapped out for a dairy-free counterpart. I adore using a plant-based “butter” alternative such as Becel plant-based baking brick. Earth Balance, Melt, and Miyoko are also wonderful dairy-free butter alternatives. If in a pinch, coconut oil will also work but note that the apple crisp will carry a faint coconut taste.

I have a secret. An easy gluten-free apple crisp secret. And I’m gonna let you in on it. It’s milk. Good old dairy-free milk. After the apples have been prepared and combined with the cinnamon, flour, and sugar and arranged on the bottom of the dish, I gently pour the milk over top. This secret step is going to keep the apples super juicy and make an apple-esque type gravy sauce in the bottom that practically oozes autumn apple yum. 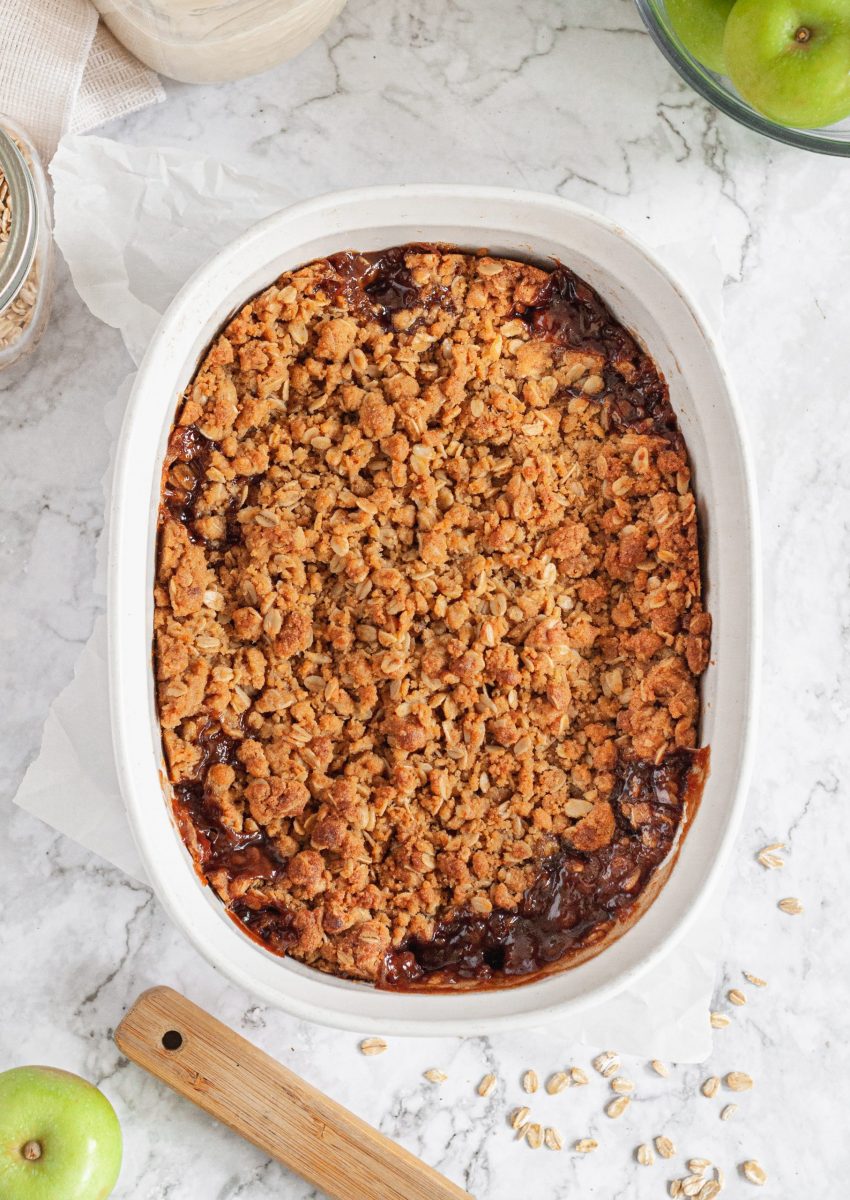 It’s easy, warm, and so totally delicious. This gluten-free (and secretly vegan) apple crisp is everything that I adore about autumn. Slightly tart apples baked to perfection underneath a crisp buttery oat top that caramelizes around the edges as it bakes. I hope you love this easy gluten-free apple crisp as much as my family and I do. Make sure you let me know below in the comments if you give it a try!

Warm Dessert Ideas Made For Fall

Autumn calls for all the warm and toasty baked goods. Here are a few recipes that I think you’ll enjoy:

Easy gluten-free apple crisp with a layer of warm tart cinnamon-spiced apples on the bottom and topped with a crunchy caramelized oat topping. This is the perfect dessert for a family gathering or when you need a warm cozy sweet treat.

* I prefer a tart firm apple like a Granny Smith or Honeycrisp but feel free to experiment with a combination of apple types. Chop the apples in different sizes to add yummy textures to the crisp.

** I used unsweetened almond milk, but any dairy-free alternative will work.