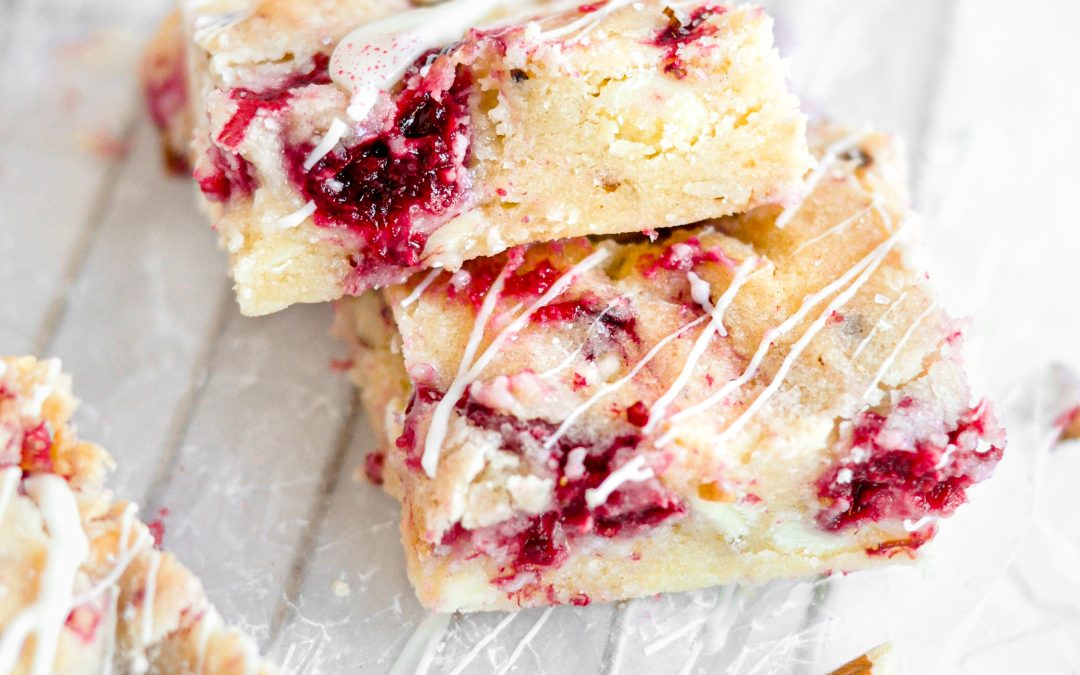 I have a freezer full of raspberries. And seeing as how my backyard raspberry patch is starting to bud I need to start using up last year’s berry stash to make way for the new crop. Enter in these ridiculously delicious Raspberry Blondies. Fresh or frozen, gather up those juicy berries and make these blondies stat! They’re the perfect summer treat. 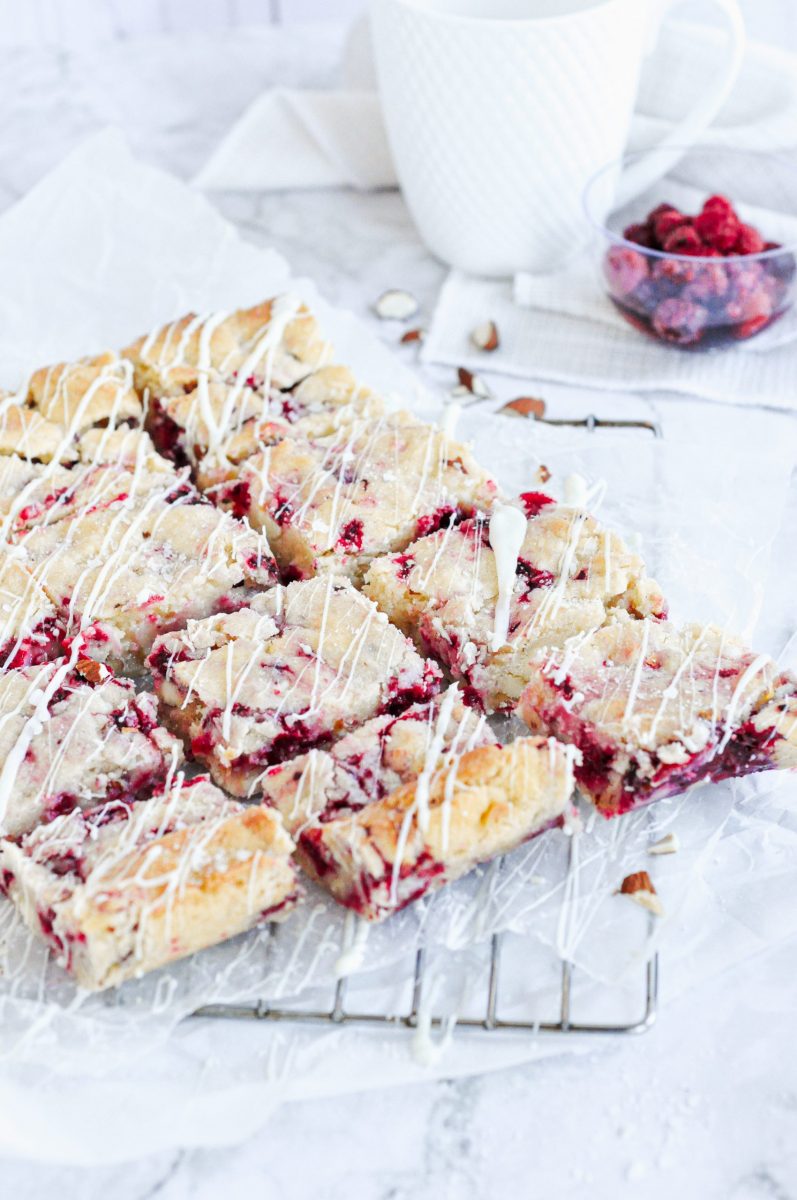 Bursting with raspberries. Riddled with white chocolate chips. And positively perfect with a hint of almond. These raspberry blondies come together in a snap and will wow a crowd. The sweetness of the white chocolate balances beautifully with the tart raspberry. Chopped salted almonds add a fun crunch element and compliment the overall flavor palette of these raspberry blondies. I’ll bet dollars to donuts you won’t be able to eat just one.

What Is A Blondie?

Everyone knows what a brownie is, but its little sister, the blondie, is a bit more mysterious. It’s not a white chocolate brownie, in fact, there’s no chocolate in it unless you add some sort of chocolate chip or chunk. A blondie has a rich creamy almost caramel-type flavor and fudgy texture. Much like a brownie though, a blondie has a high fat to flour ratio causing that heavenly melt-in-your-mouth sensation in every bite. 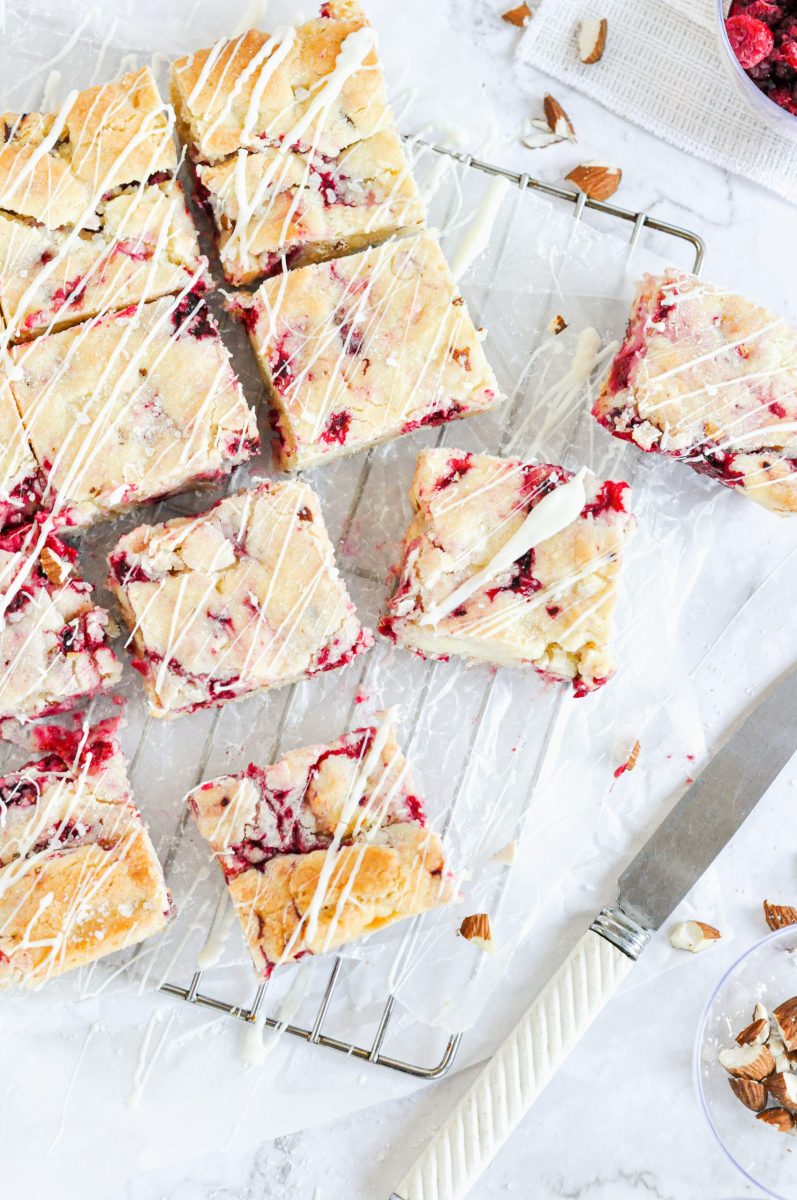 How To Make Raspberry Blondies

I experimented a bit with these blondies. In the first batch, I creamed the butter and sugar together. With the second batch, I melted the butter first and then creamed it with the sugar. Both ways worked and were totally yummy but the second one using melted butter was oh so fudgy and creamy.

After the melted butter and sugar are combined, the remaining wet ingredients go in. Shortly followed by the dry ingredients. Last, but not least, in goes the white chocolate chips, chopped almonds, and raspberries.

Should I use fresh or frozen raspberries?

You can use either fresh or frozen raspberries for these raspberry blondies. I’ve got two tips to keep your raspberries as plump as possible. The first tip, add the raspberries at the very end after the white chocolate chips and chopped almonds have been incorporated. Very gently and gingerly fold the raspberries in with a spatula. Don’t mix too long or else the raspberries will begin to break apart.

Second tip is if you are using frozen raspberries, do not thaw them out. Add them in straight from the freezer. But be aware that this will cause the blondies to need few more minutes in the oven due to the added moisture. 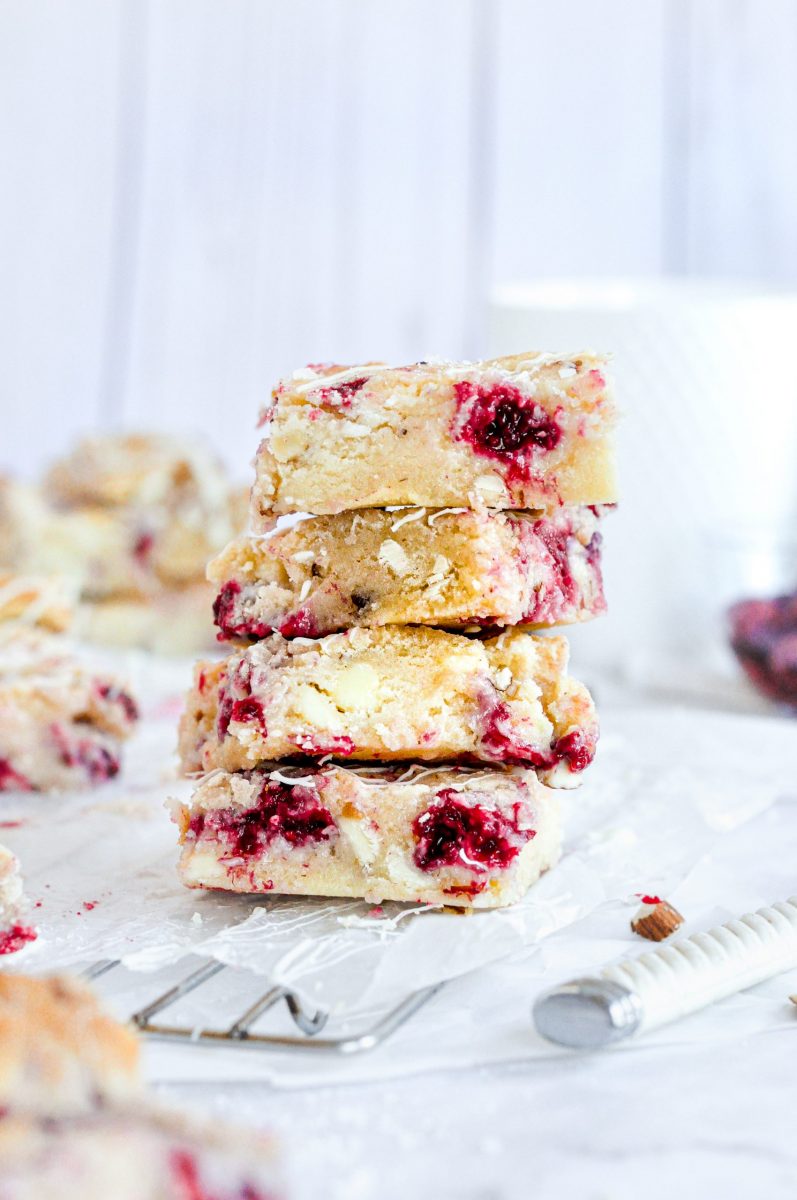 How To Cut Raspberry Blondies

I would not judge you if you decided to forgo cutting said raspberry blondies and went straight in with a fork. They’re that good! But if you do want to cut them up here are a few helpful hints. Make sure the raspberry blondies are completely cooled before cutting them. Not a little bit cool, I’m talking 100% cooled. I pop mine into the fridge for at least an hour if at all possible. This helps them firm up.

Another helpful way to make serving and slicing easier is to line the baking pan with parchment paper. This ensures that removal is 1000x easier and cleaner. Make sure that there is a little bit of parchment paper overhang on each long side of the pan. Run a knife along the edge not covered with parchment paper to ensure the raspberry blondies are not baked on and gently lift up evenly on both overhang parchment pieces.

Have we covered all the raspberry blondie bases? I sure hope so because these bars are too good not to bake. Seriously. I ate an embarrassing amount of these. But it was all in the name of science, right?! Regardless, grab that freezer bag of raspberries I know you have stashed way down in the depth of your deep freeze and bake these bad-boy blondies up! Need more raspberry desserts in your life? Check these out:

* Melt the extra white chocolate chips in a microwave-safe bowl in 30-second intervals, stirring after each interval, until fully melted and smooth. Drizzle over fully cooled raspberry blondies.

** If you are using frozen raspberries, the blondies may require additional baking time. Check for doneness in 5-minute intervals after the 30-minute mark.